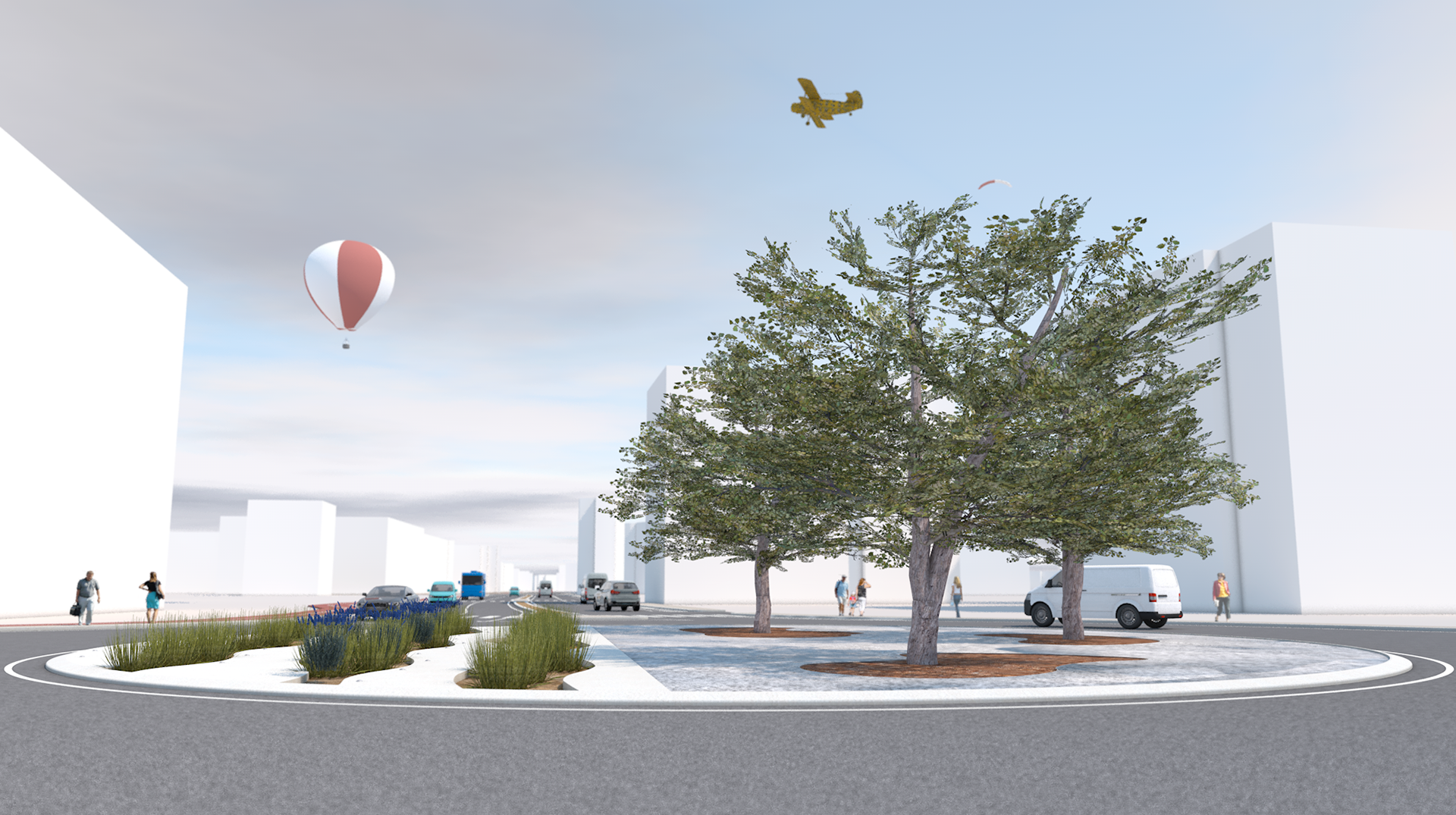 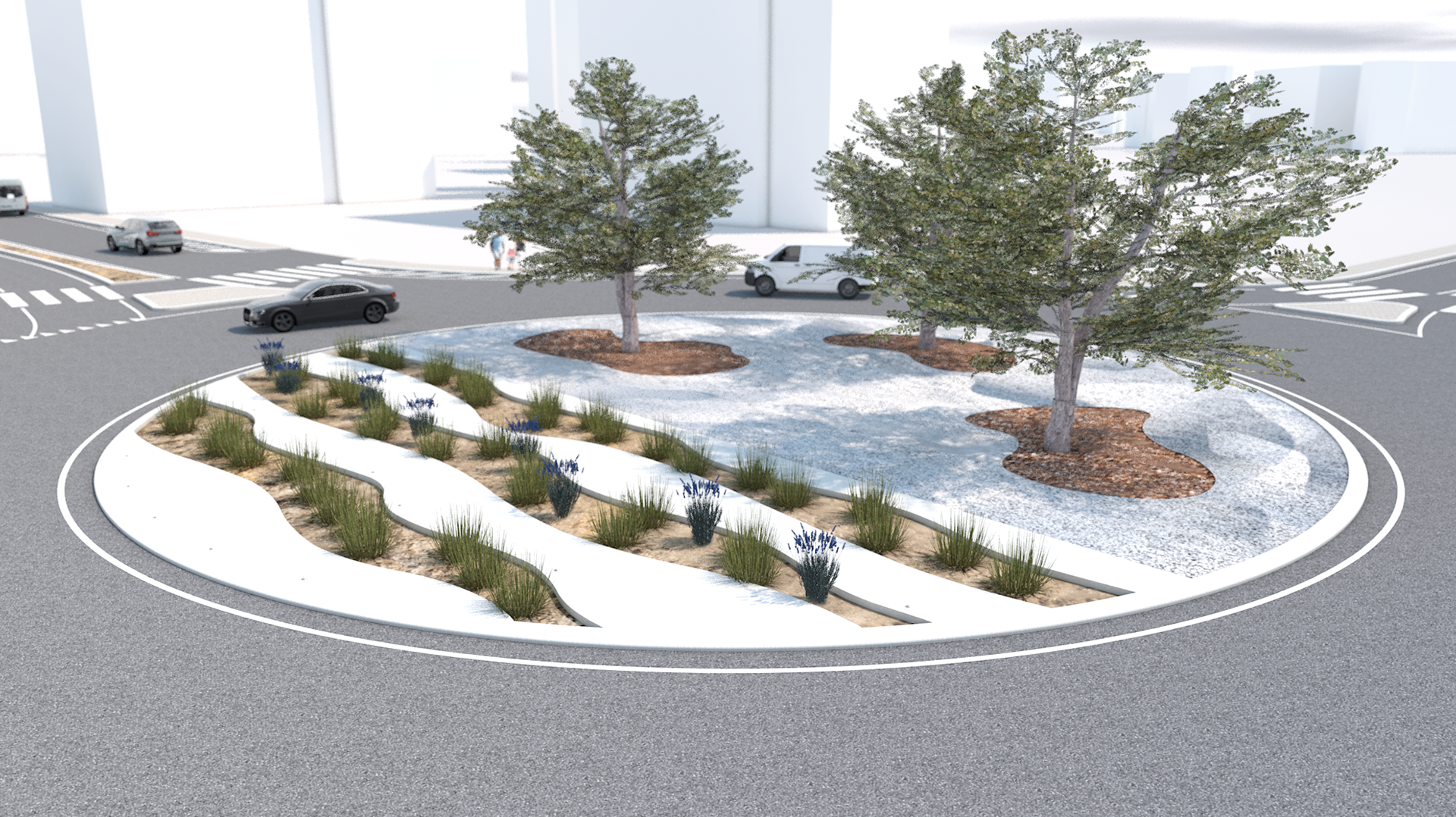 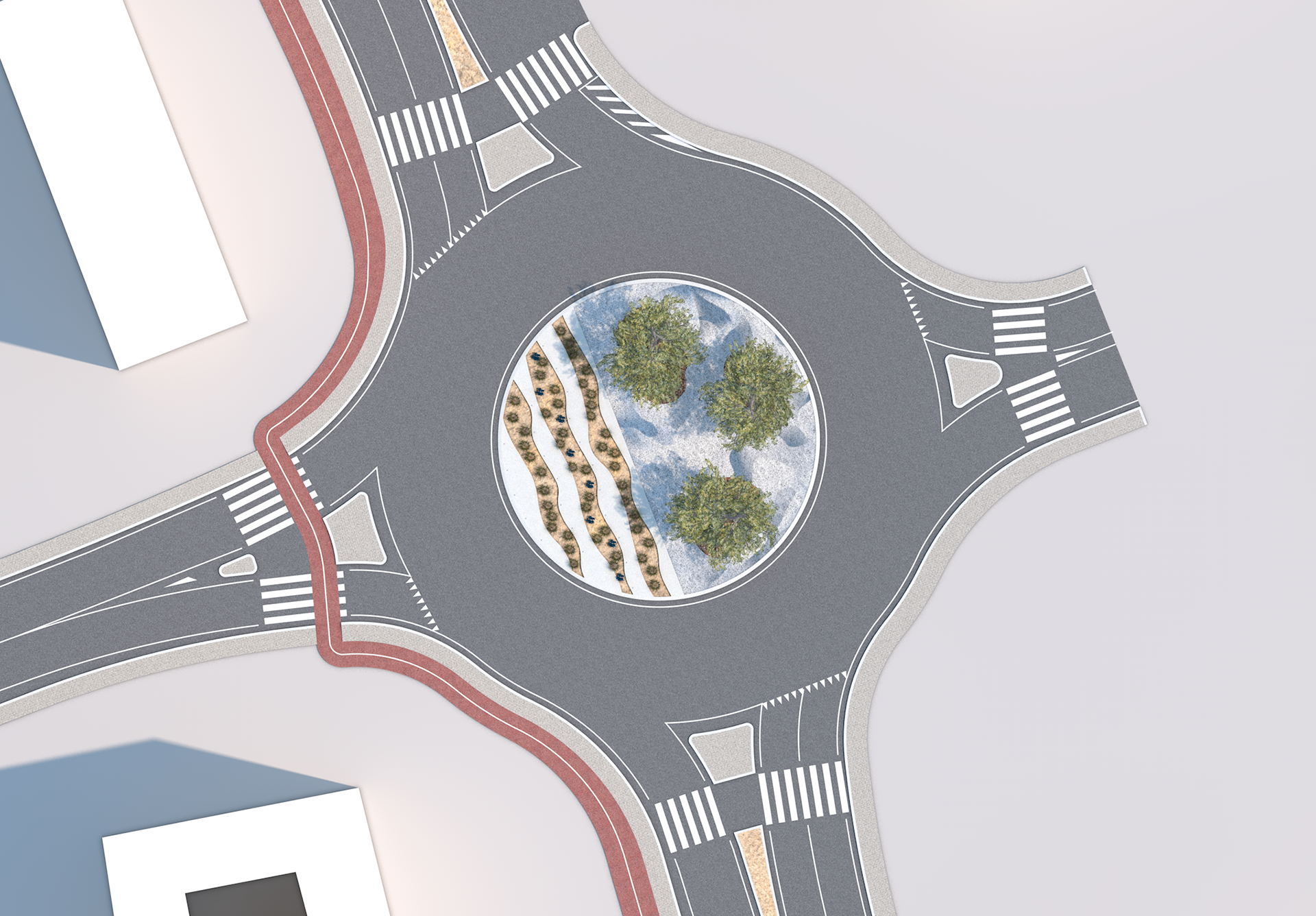 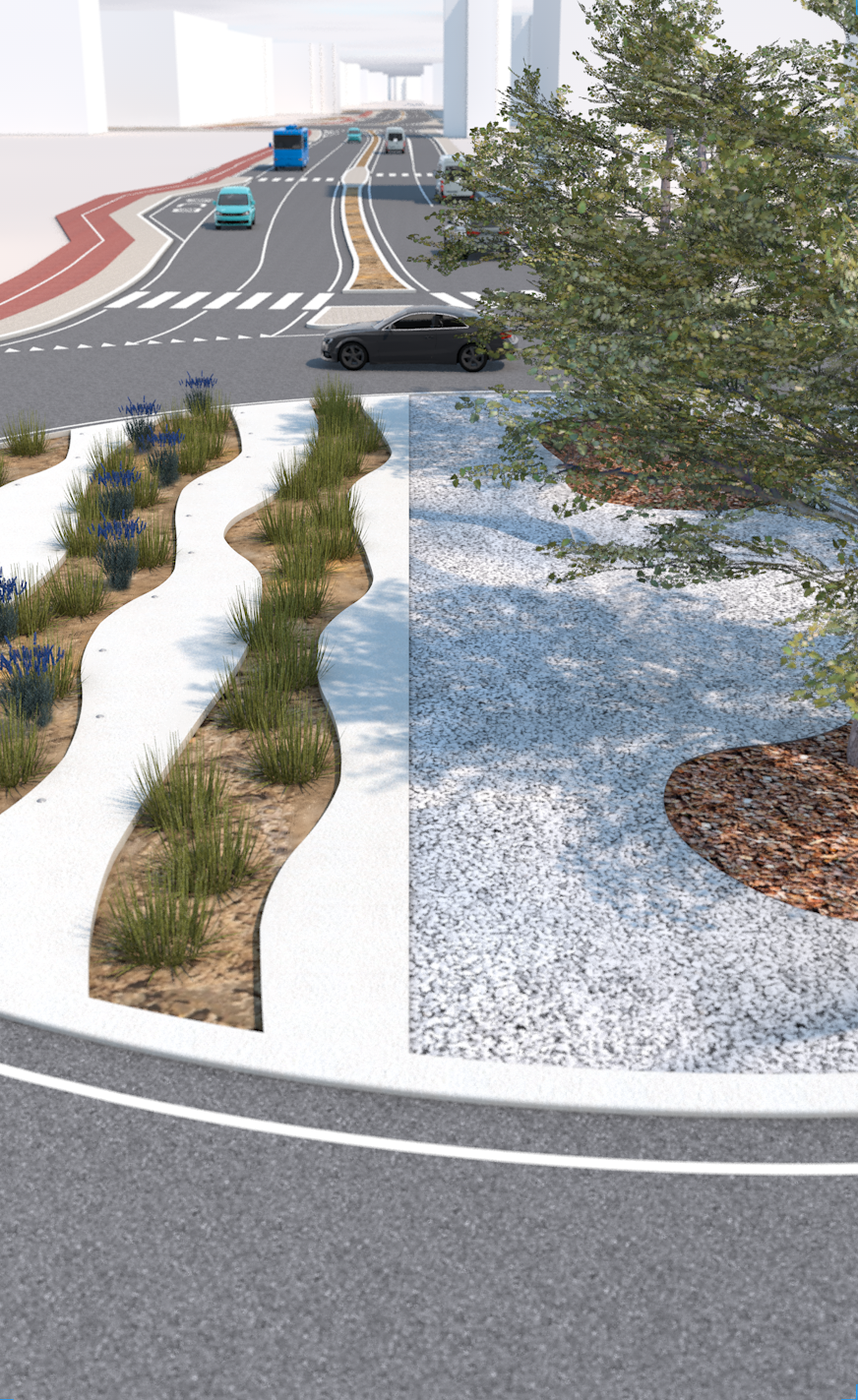 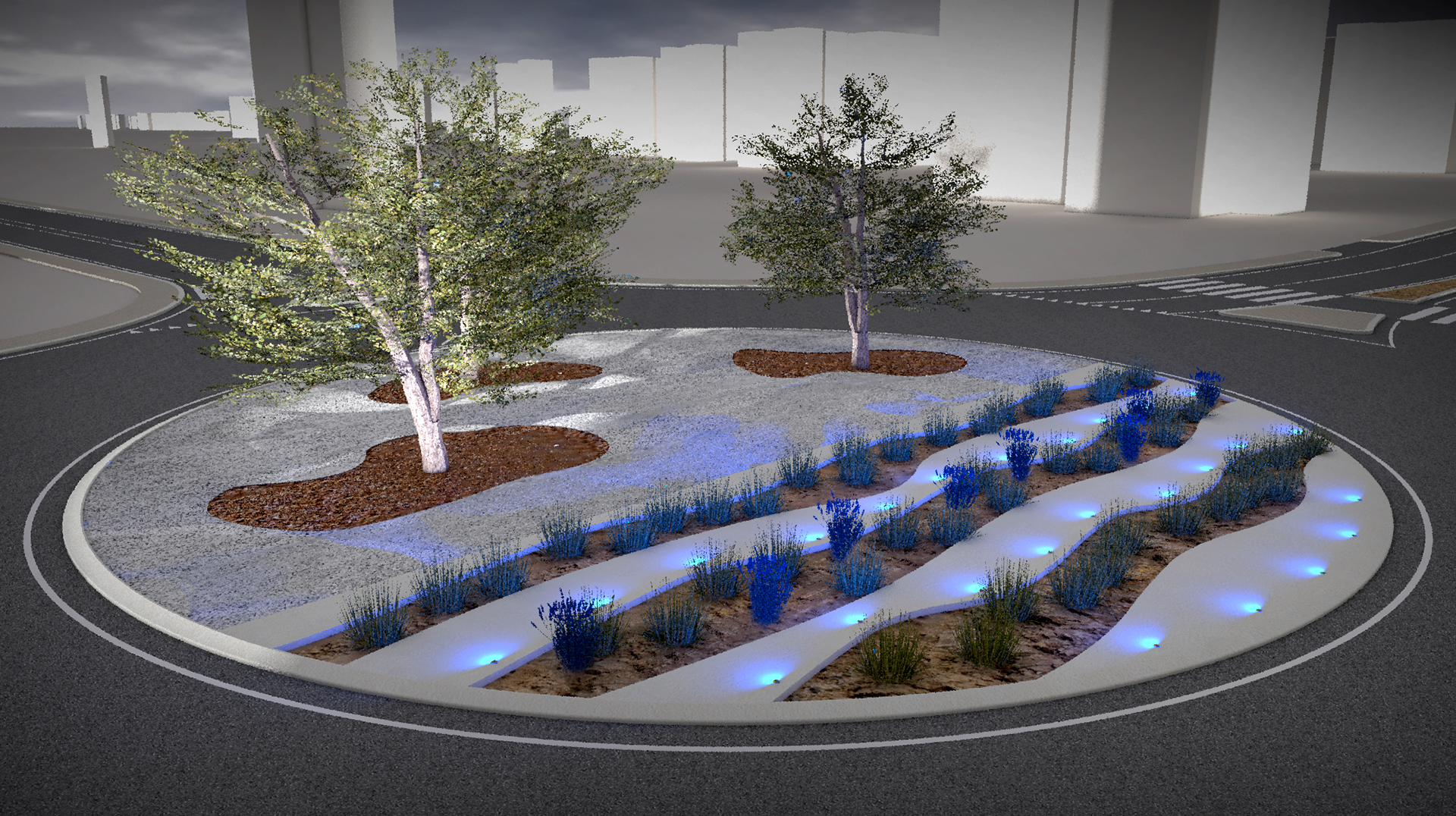 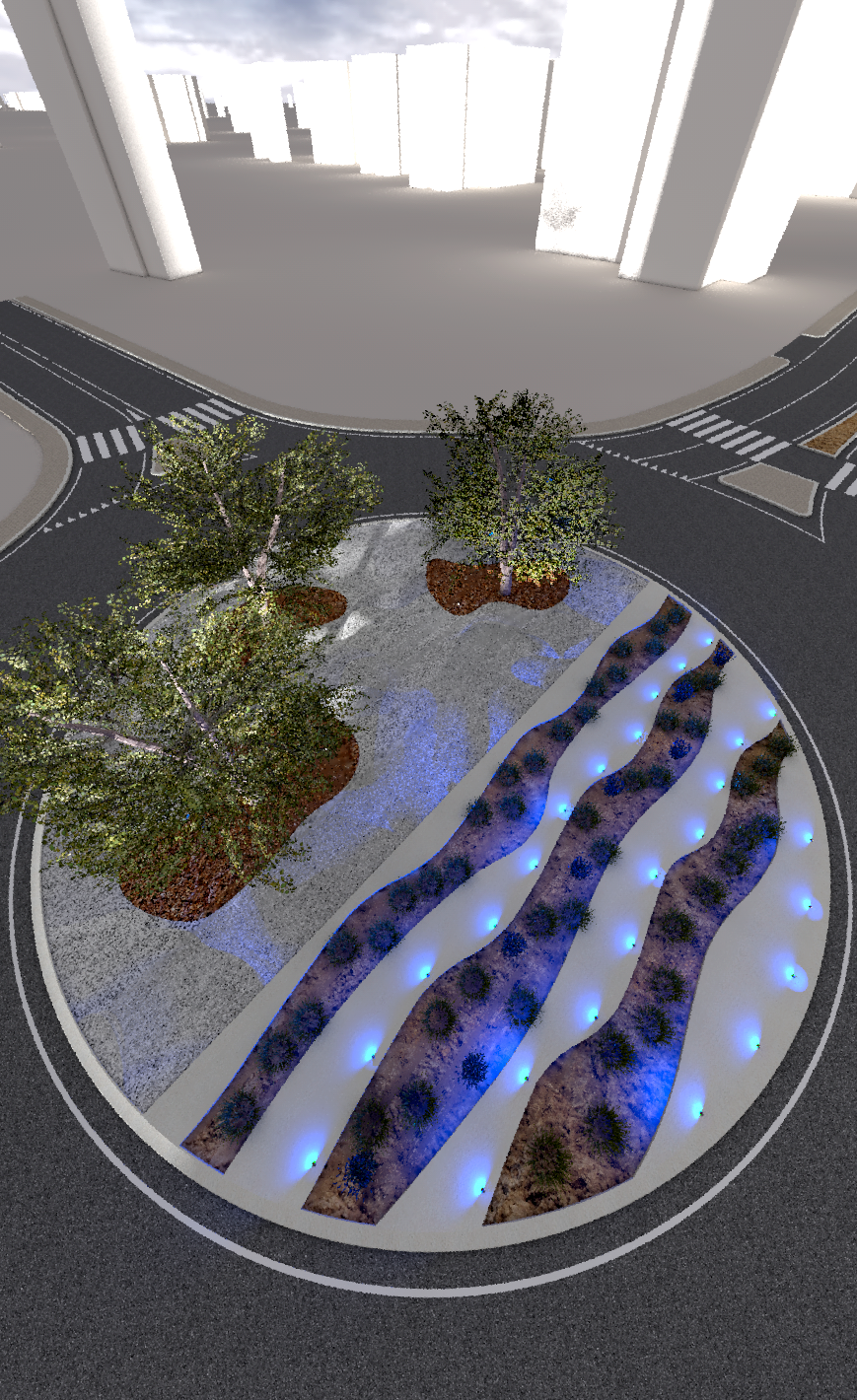 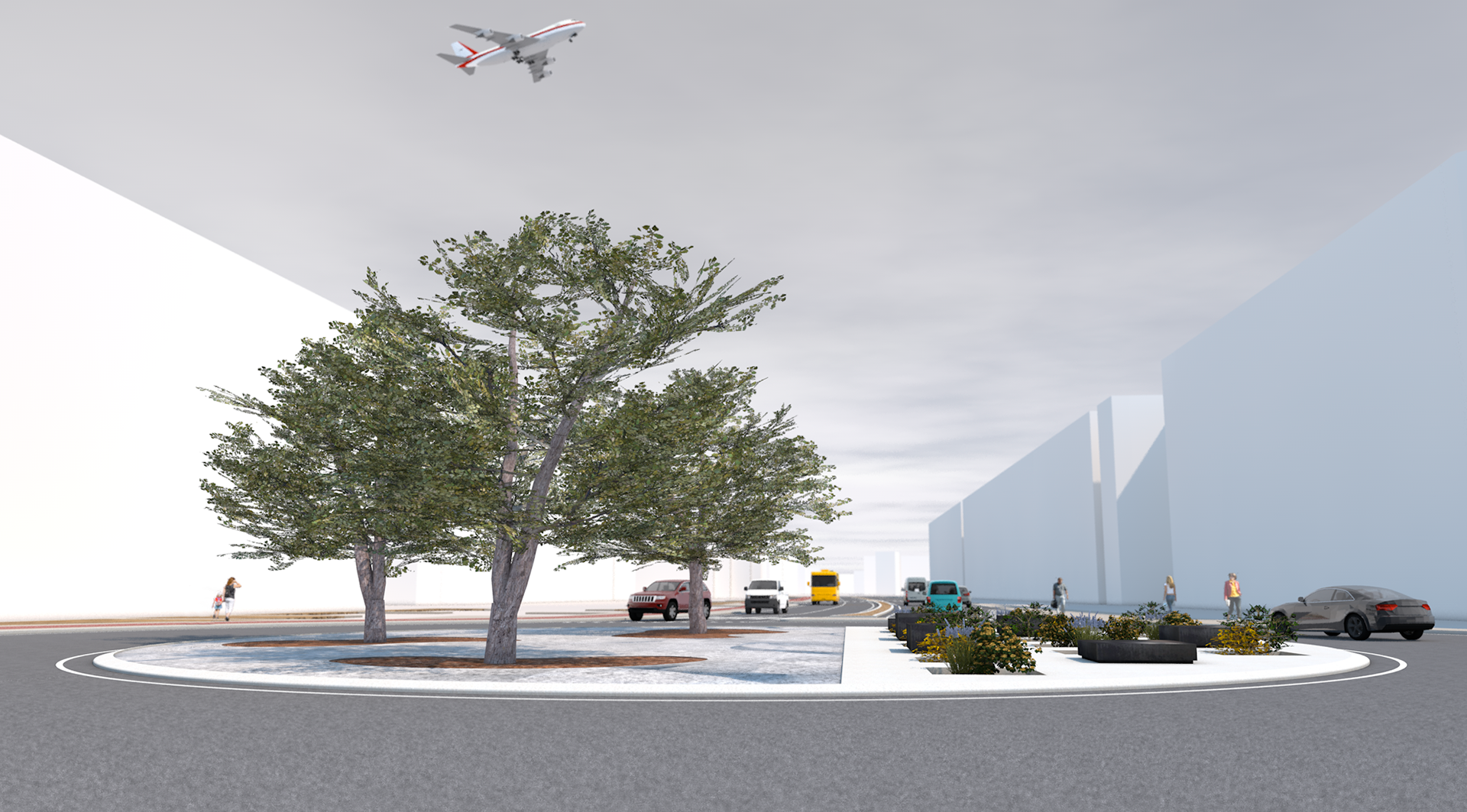 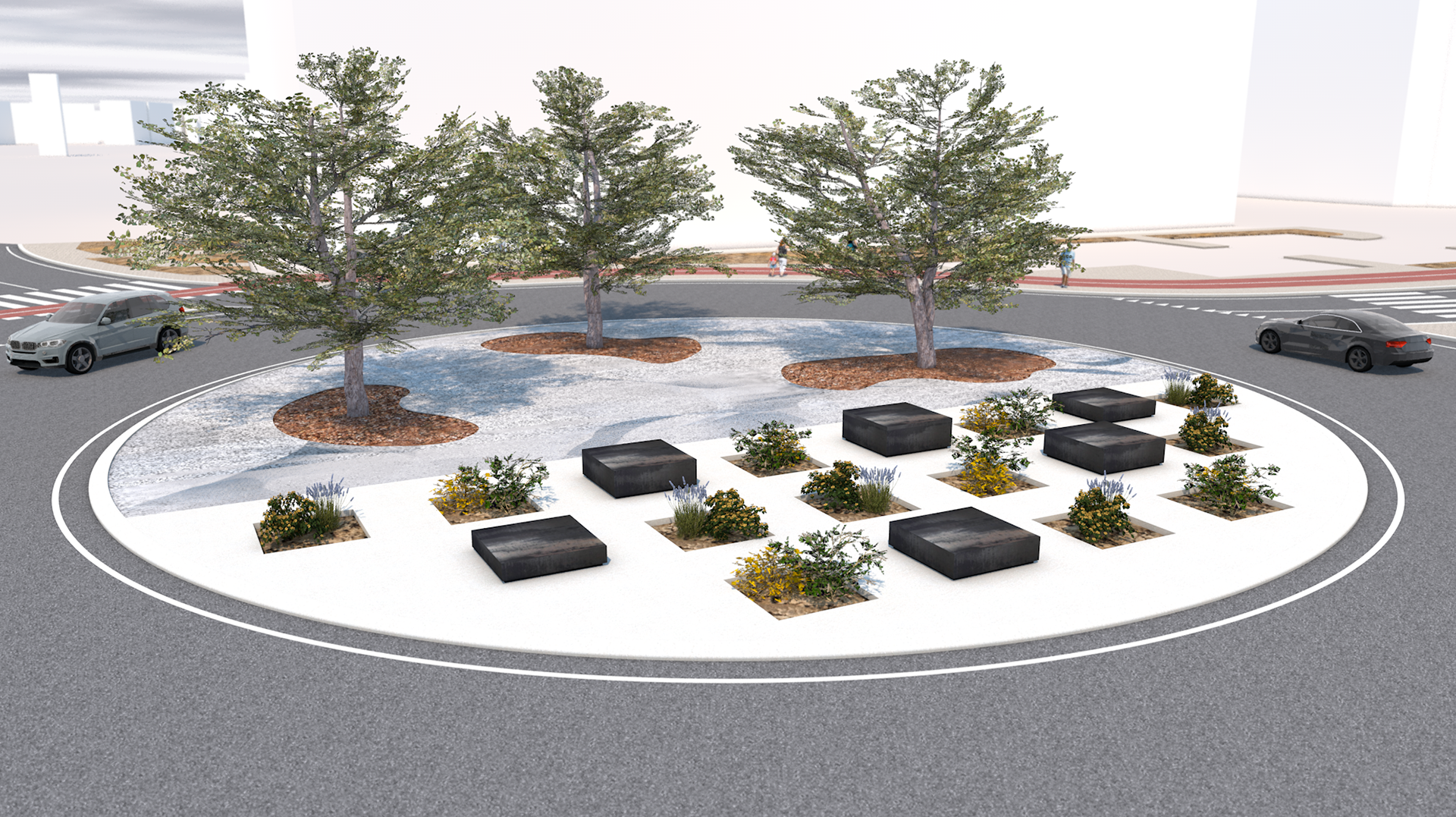 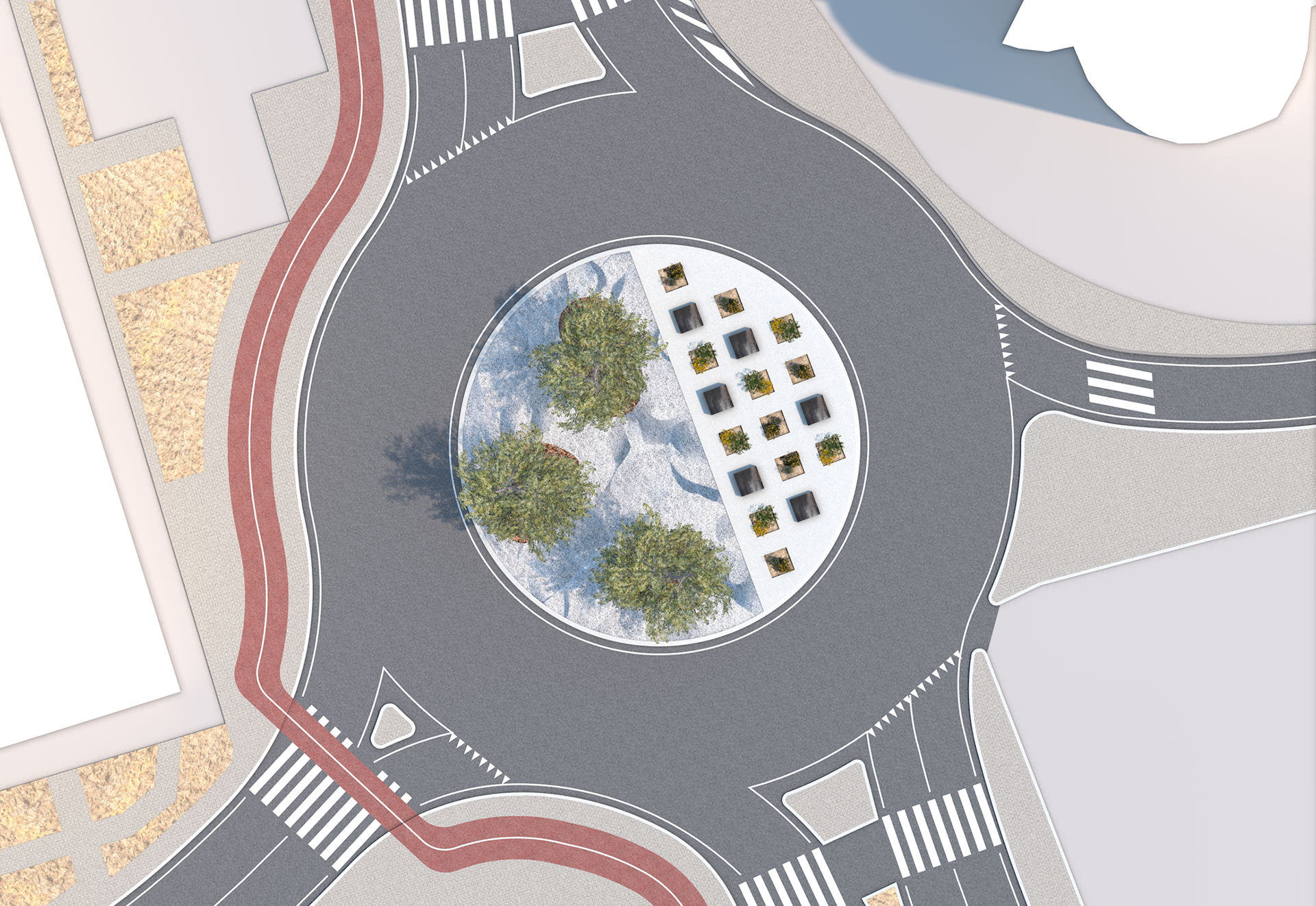 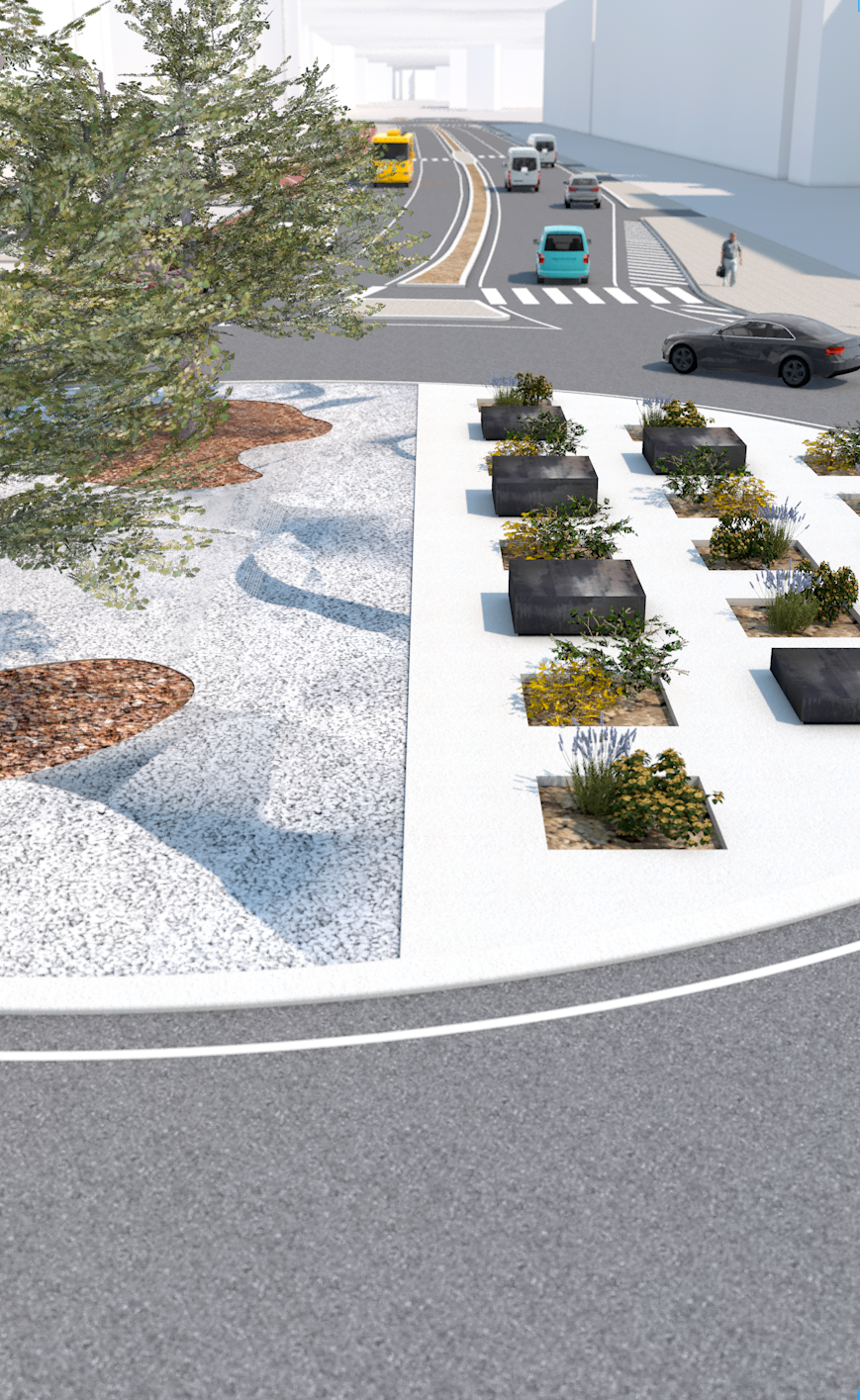 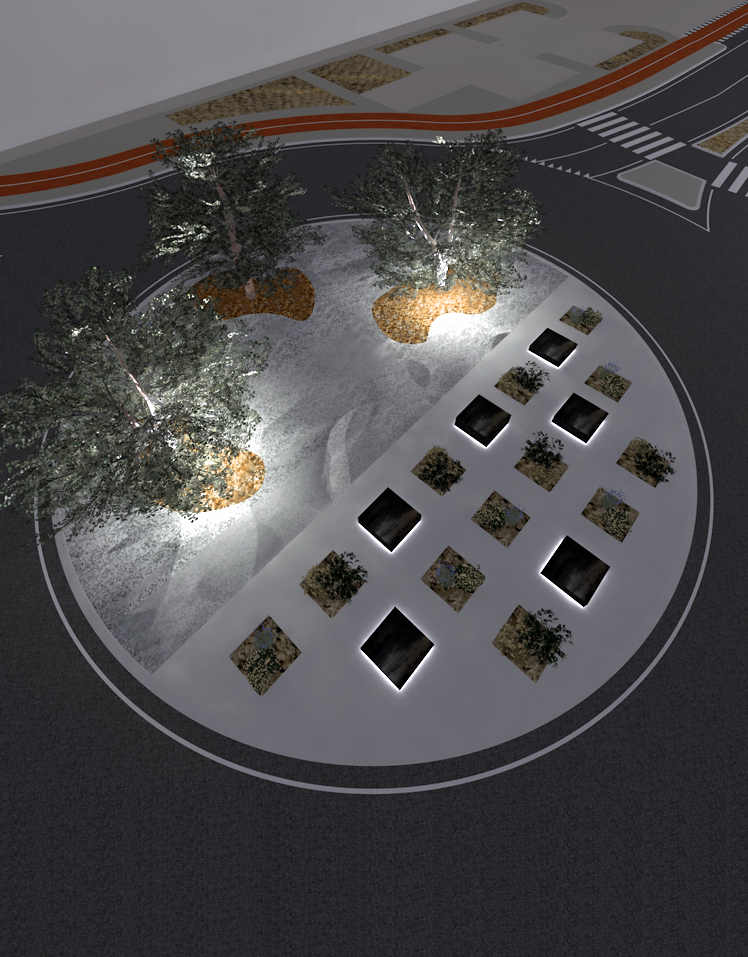 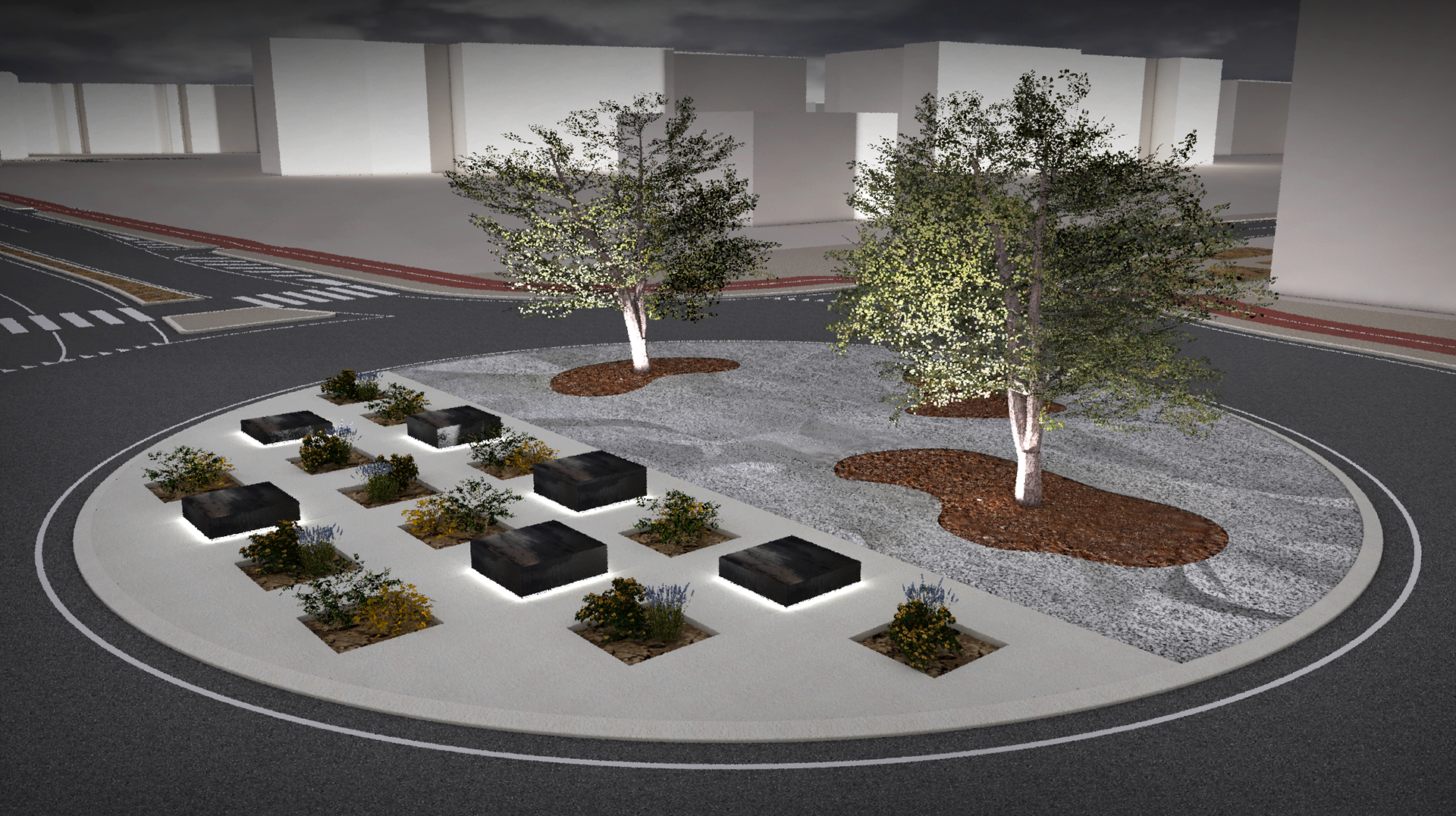 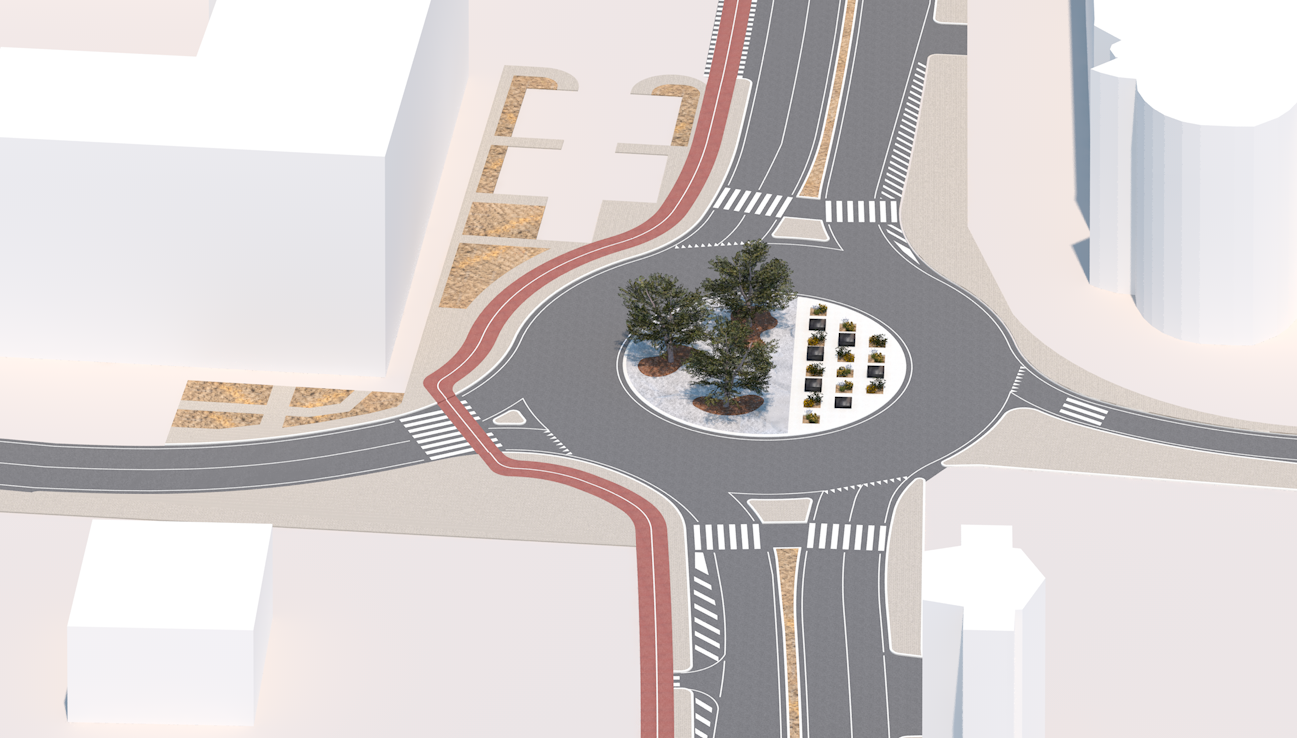 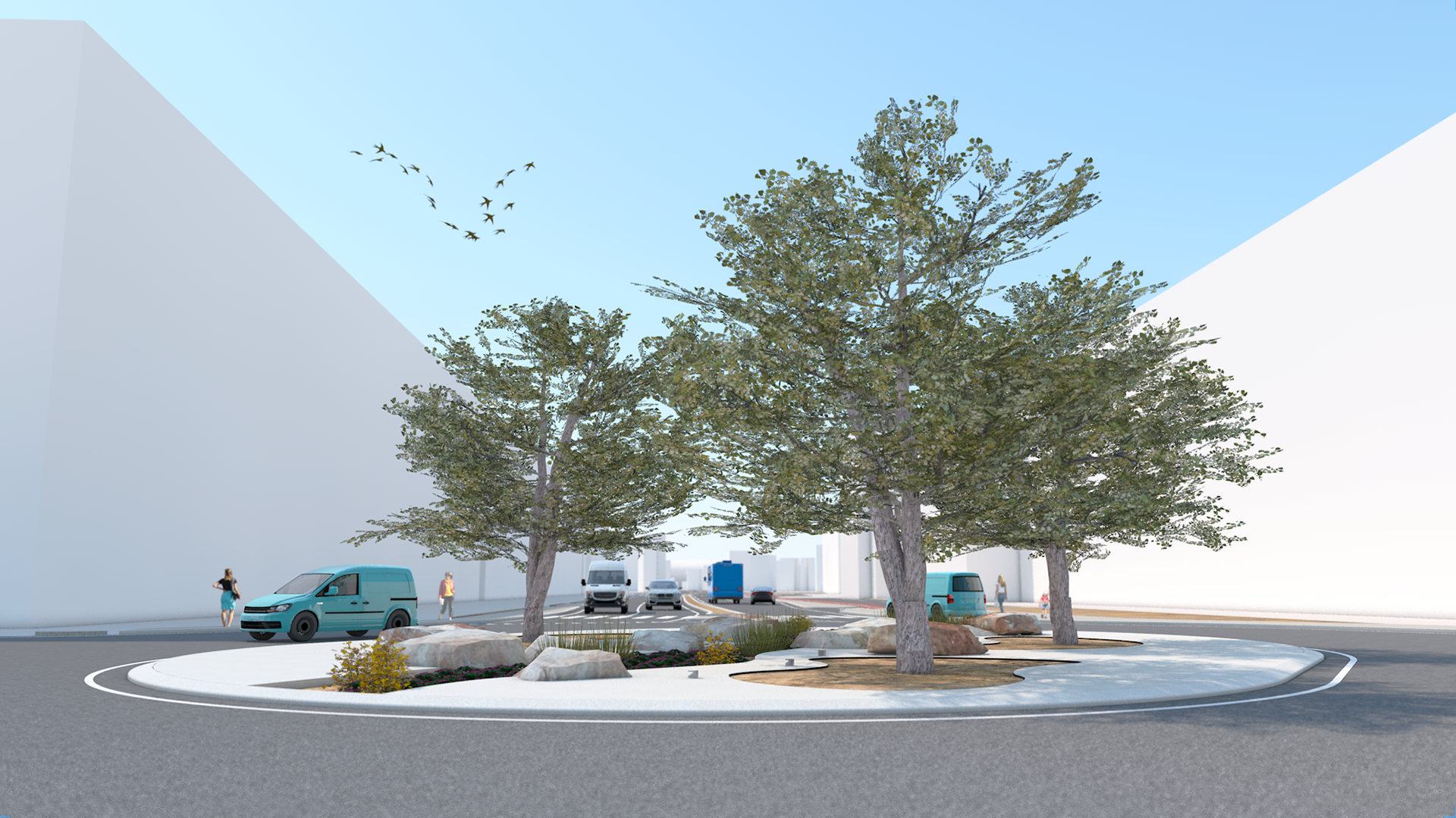 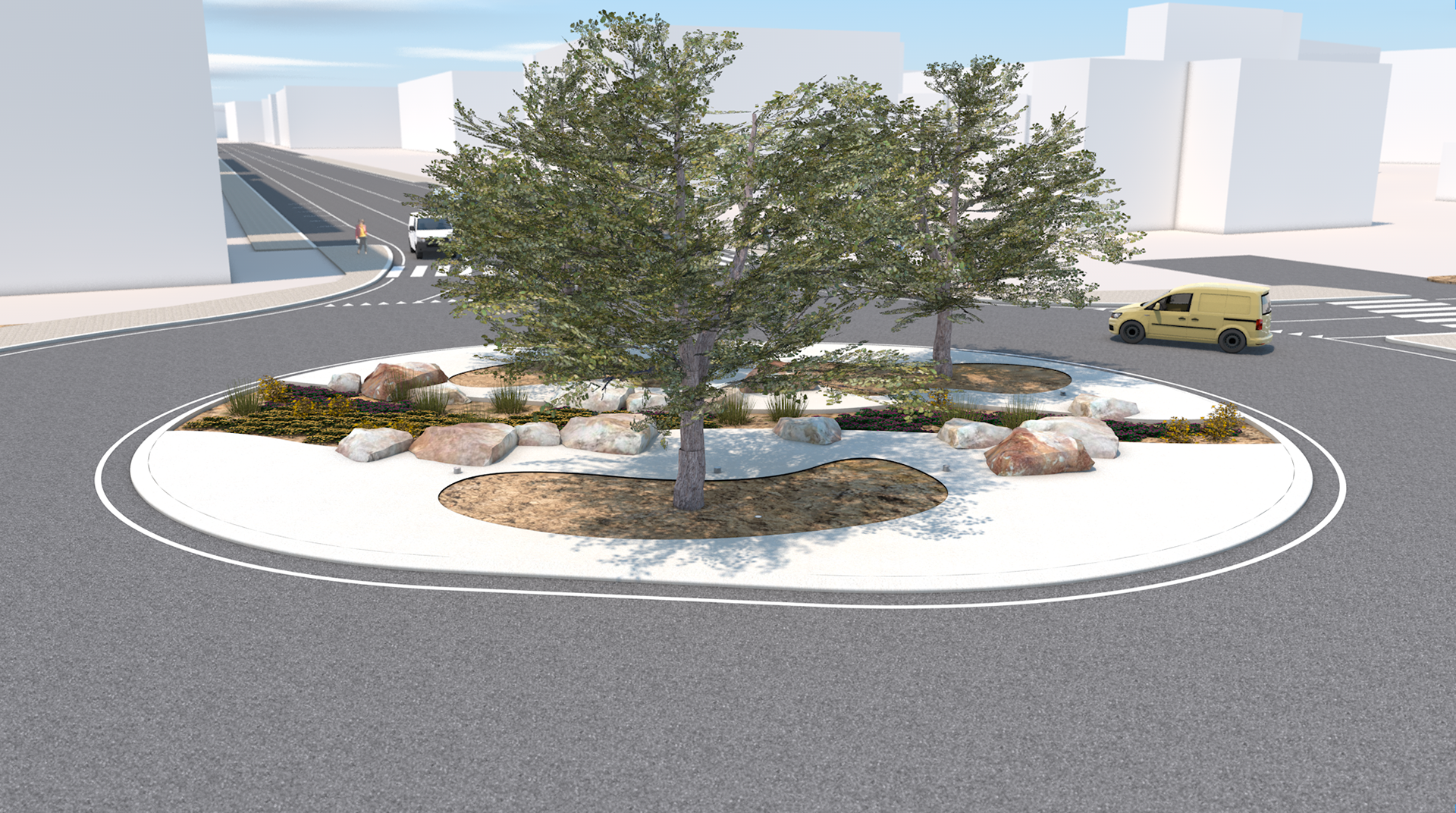 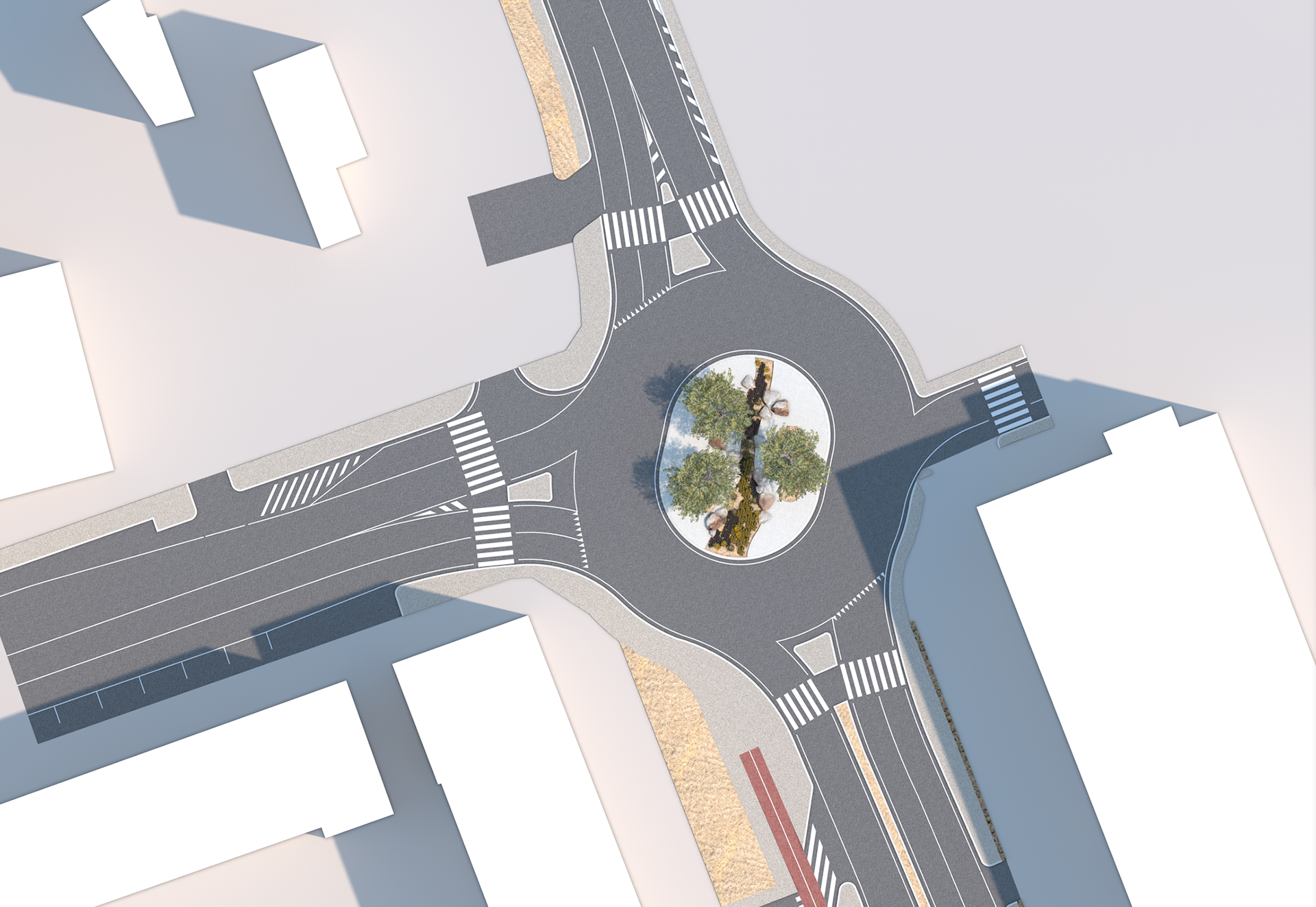 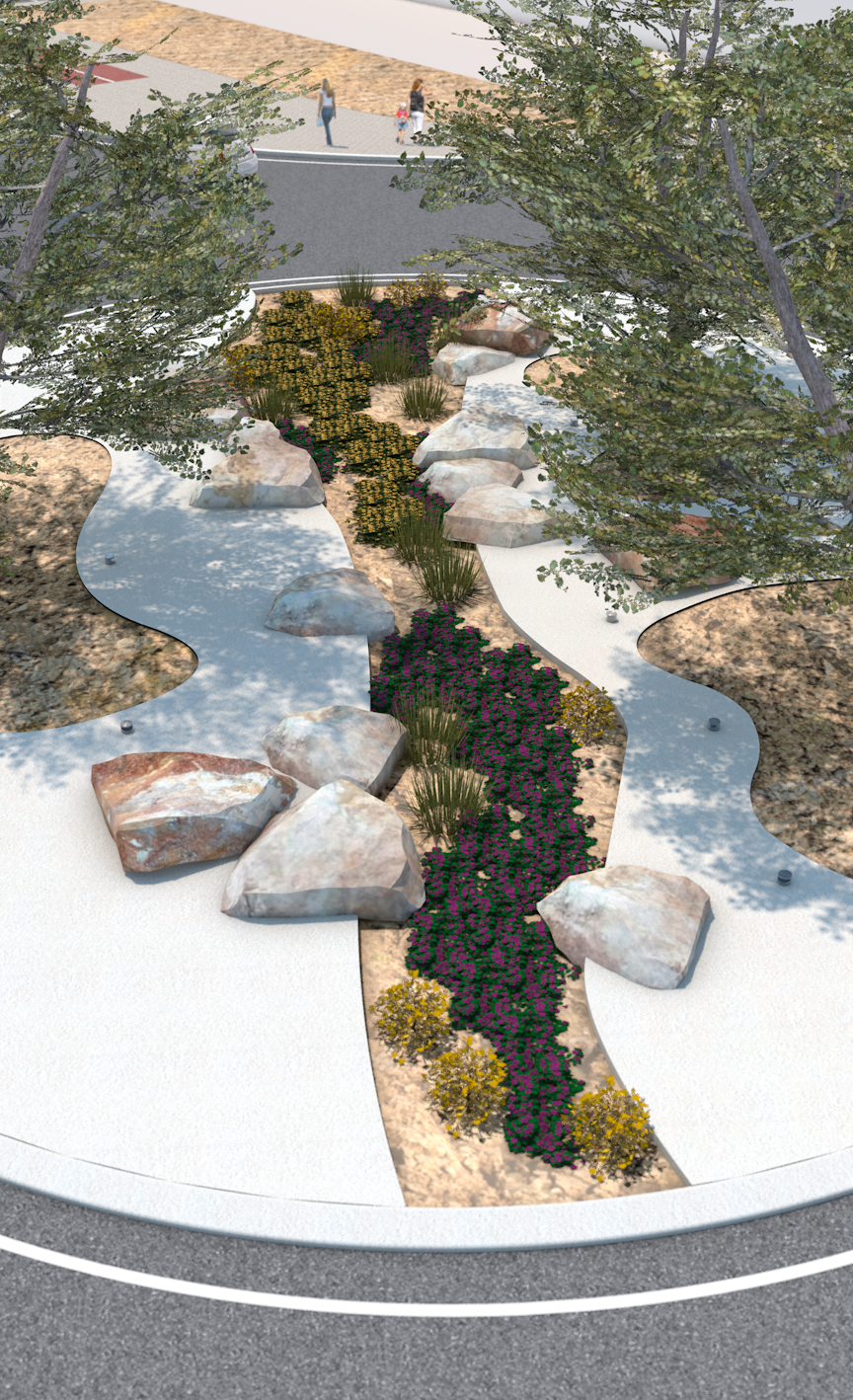 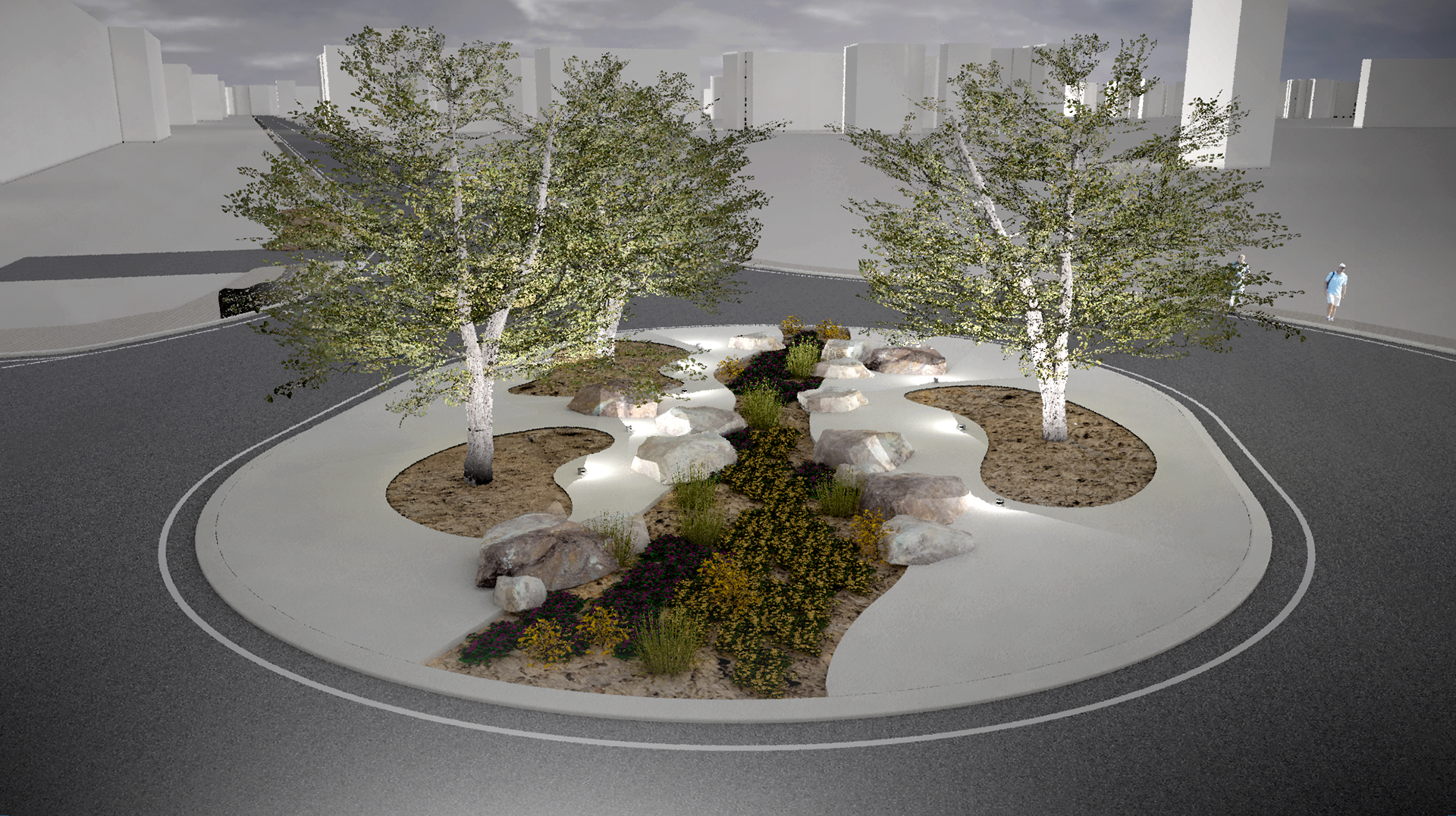 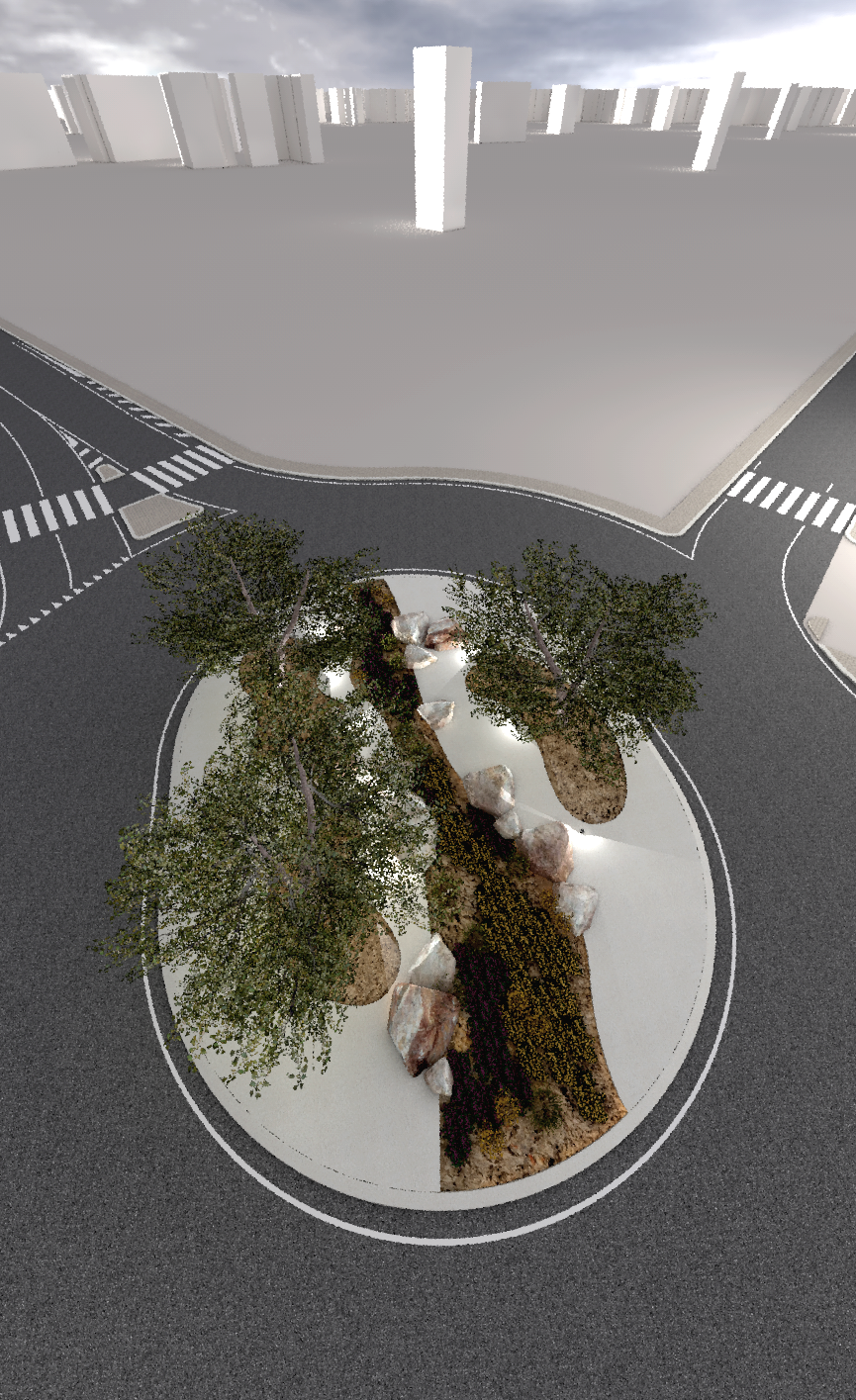 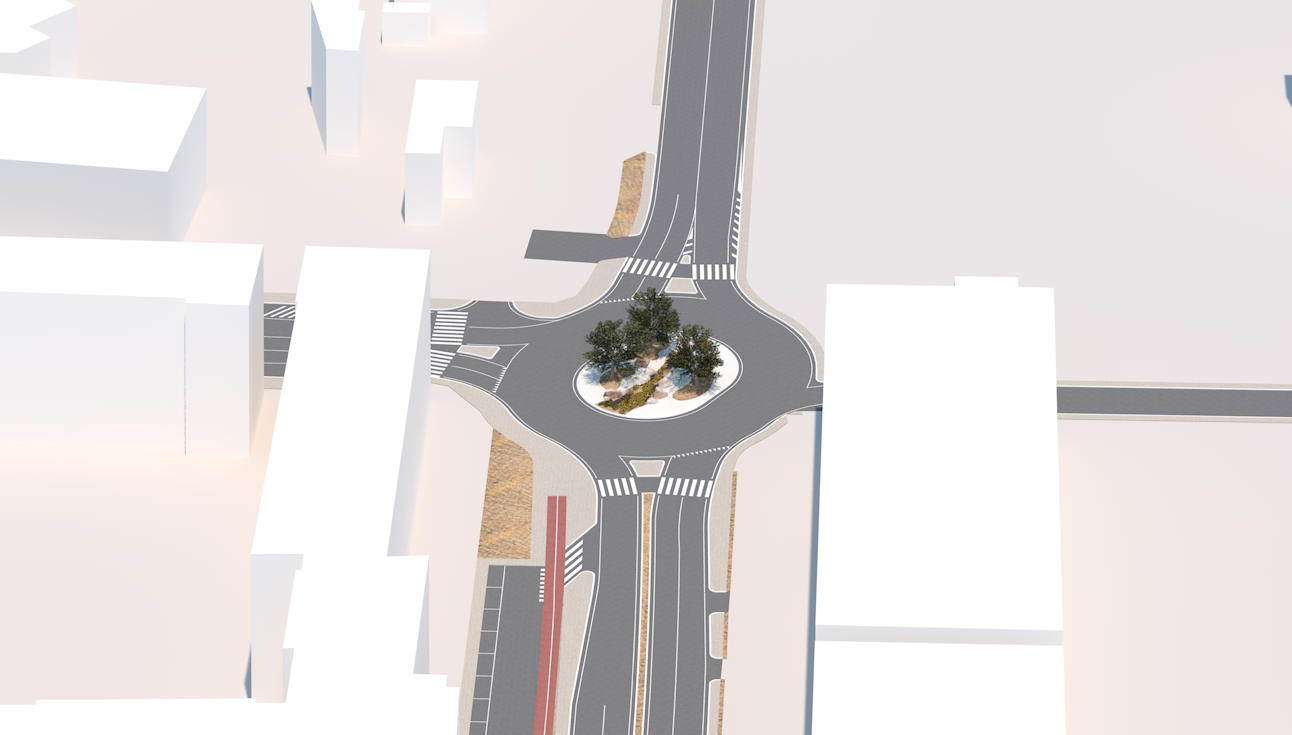 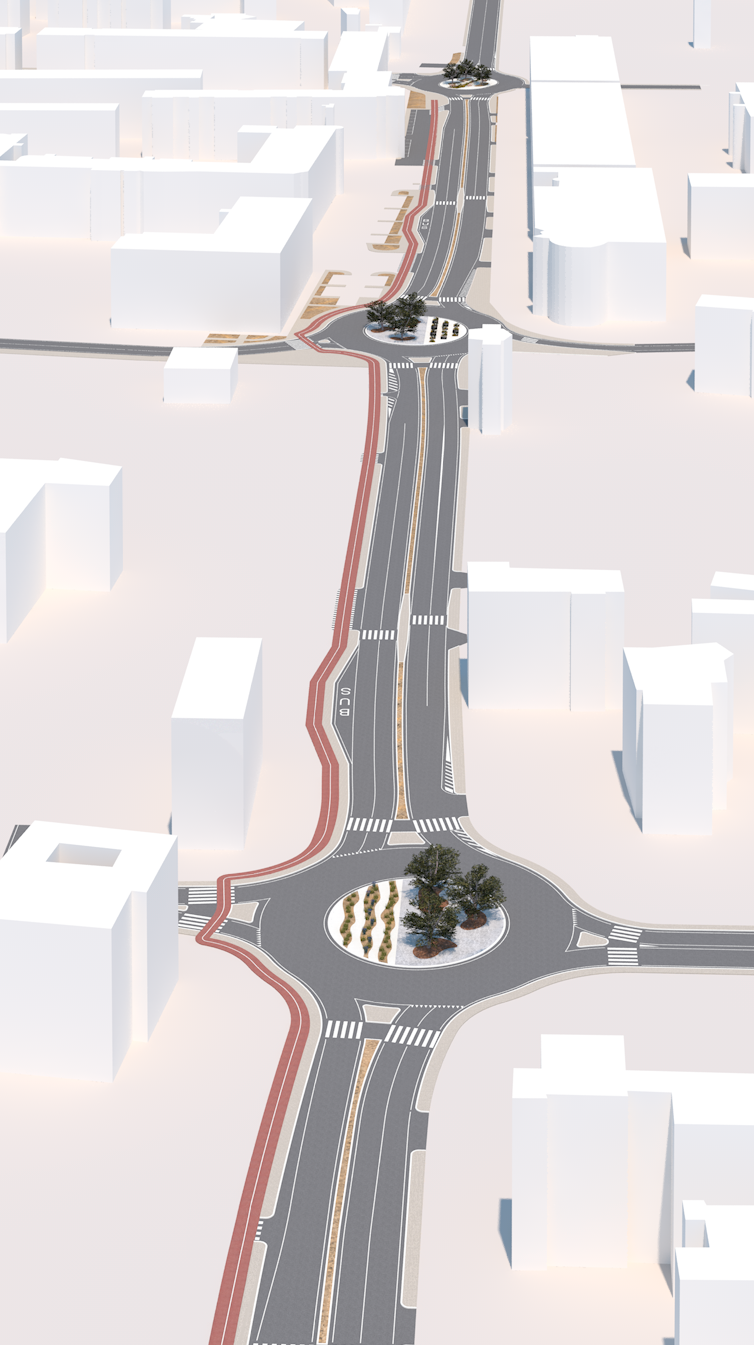 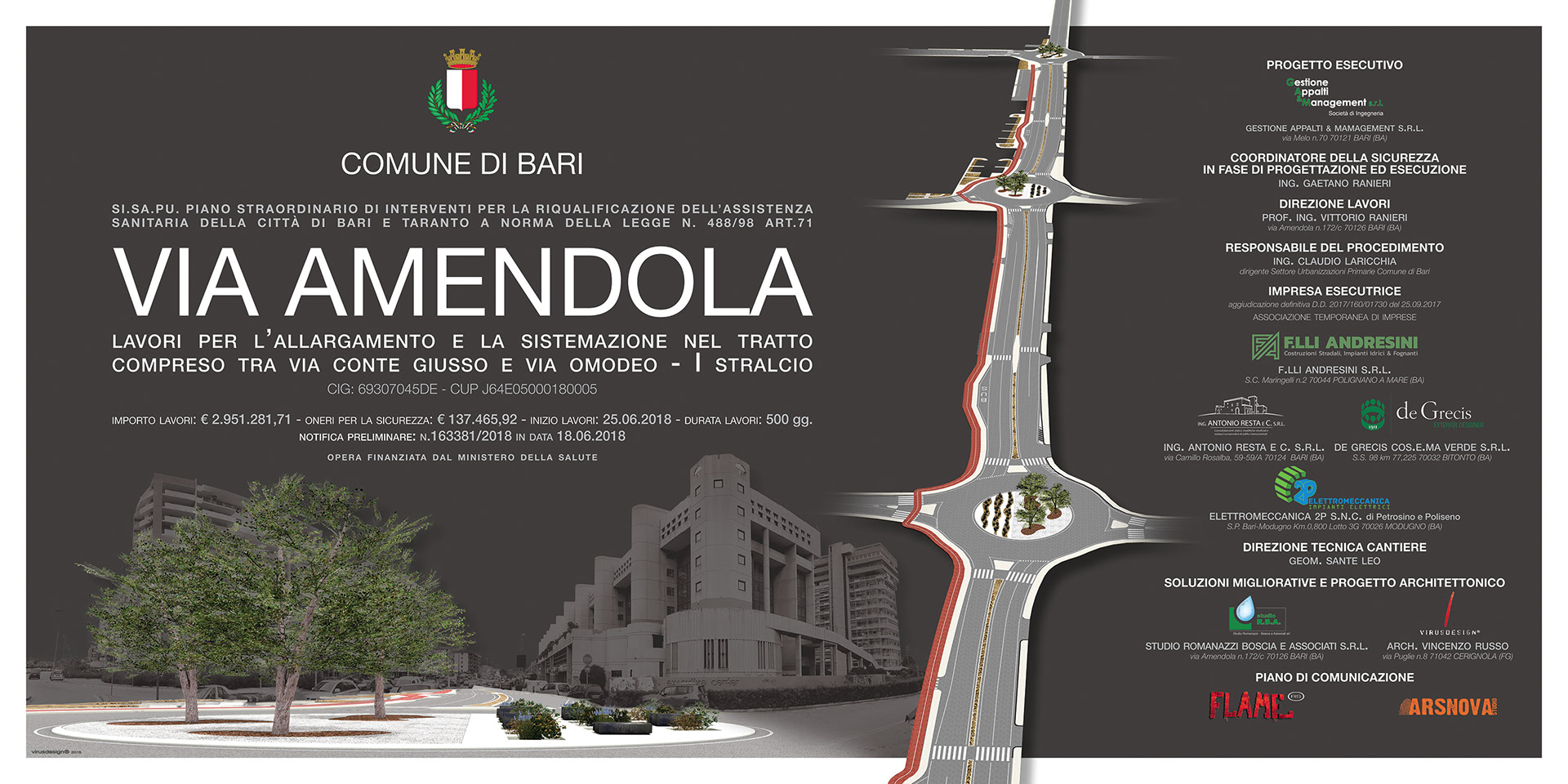 Arrangement of VIA AMENDOLA in the section between Via Conte Giusso and Via Omodeo - Bari (BA)
2017
The green layout project of three roundabouts along Via Amendola, one of the main axes of access to the Apulian capital, is drawn up as part of the proposed technical improvement proposal on the executive project based on the tender by the Municipality of Bari. The project proposal , processed in ATP with the Romanazzi Boscia studio a Associati S.r.l. di Bari, was the winner of 23 projects in the competition and is currently being implemented.
The green layout of the roundabouts planned at the intersections with the Hahnemann street, the Via Laforgia and viale Einaudi, was imagined not only as a response to the request for additional urban green space, but also by imagining these areas as places for the introduction to narration of the city. Three themes have been identified, among the many representative of the city of Bari, and translated into a minimal and metaphorical form within the respective roundabouts. Paraphrasing the meaning assumed by the Via Amendola as an artery of crossing and transition from the territorial context to the urban fabric, three Bari symbols / places have been identified:
- the blade;
- the Murattiano district;
- the sea
Each of the three themes, isolated in their respective roundabouts and autonomous in its scenic organization, engages in dialogue with others in order to simplify an introduction to the extraordinary story of some of the icons of the Apulian capital. The dialogue and coordination between the three scenes is entrusted to the use of stone and olive trees, recurrent in the three roundabouts. The narration of the themes takes place through the adoption of different and evocative natural geometries and scenes. The ones in sequence with the others contribute to the construction of a scenario of quality and formal cleanliness, which refers to the three territorial icons.
As foreseen by the call for tenders, the three roundabouts host in fair quantities the nine olive trees coming from the removal of the existing trees in the areas subject to expropriation. They are a kind
of trait d’union between the three contexts, they are also used to provide a harmonious balance between full and empty spaces.
Also the choice of materials, all strictly natural (river gravel, limestone, pine bark and burnished steel), was made in order to restore balance, existing in the three
evoked contexts, between natural habitat and anthropic settlement. And the areas paved with stone slabs, deliberately used to give architectural rigor and reduce maintenance requirements, are moderated by large permeable surfaces filled with rubble and gravel of
river, where not affected by green flower beds.
Even the lighting solutions adopted for the three roundabouts move from the aim of guaranteeing a night scenography that enhances the three areas within the entire Via Amendola track. An accent lighting transforms the foliage of the olive trees into recurring lamps in the respective intersections, giving continuity of language to the night scene as well. The task of enhancing the most iconic and formal design parts (flower beds, essences, stone blocks, steel elements) is instead entrusted to the luminous radiations.
CLIENT: Comune di Bari (BA) - ITALY
DESIGN: arch. Vincenzo Russo, Studio Romanazzi Boscia Associati S.r.l.​​​​​​​
COMPANY: A.T.I.: F.lli Andresini S.r.l., Polignano a Mare (BA) - ing. Antonio Resta e C. S.r.l., Altedo (Bo) - De Grecis Cos.e.ma verde S.r.l., Bitonto (BA) - Elettromeccanica 2P S.n.c., Modugno (BA) ITALY
LOCATION: Bari (BA) - ITALY
YEAR: 2017